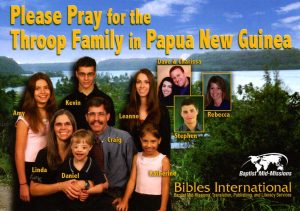 Craig and Linda Throop have spent much of their lives together working on translating the Bible into the language of the Kaulong people in Papua New Guinea. Now with that long-term goal nearing completion they have made a commitment to continue their work in PNG through the establishment of a Bible translation center in Kandrian. In the following excerpt from a recent e-mail, Craig lays out his vision for the project and some of the difficulties he and his family have encountered: 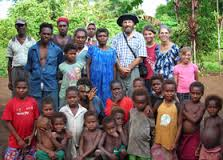 “We have made it our ministry goal to complete the Great Commission in southwest New Britain, the area of Papua New Guinea in which the Kaulong people live. As we near the time when the translation of the Scriptures will be completed among the Kaulong people, we are setting our sights on the dozen or so other people groups of southwest New Britain. We have seen the Lord work mightily among the Kaulong and believe that He wants to do so among these other people groups as well.

Currently, we are attempting to lay the foundation for expanded ministry by building a small translation center in  Kandrian, the government administrative center for the southwest New Britain area . . . judging from all the problems and opposition, Satan definitely does not want this to happen. There were supply problems (the barge from town failed to deliver our cement and gravel two times; the gravel finally came on the third trip, but there was no cement); the government minister for lands gave us a ‘stop work’ order which he withdrew only two days before our building team from the States arrived; some people in our village began to demand compensation for the land on which our old house has been sitting for the past nineteen years. These were just a few of the problems.

There were many times when I felt like giving up, thinking that maybe this wasn’t God’s will after all. But just at the last minute the door would open again allowing us to go on. My prayer to the Lord has been, ‘Lord, if you don’t want us to continue, then close the door and lock it.’ He hasn’t done that yet, so we press on.”

We encourage you to prayerfully support Craig and his family and their vital work in Papua New Guinea. Here is how to reach them and where to direct your financial support: